AHS Advisory assisted the developers of the new Rydges hotel at the international terminal at Sydney Airport.

Rob McFarland was a guest at the hotel, and wrote the following report.

Travel descriptions can evoke a wide range of emotions. At one end of the spectrum sit terms such as “overwater bungalow”, “champagne breakfast” and “free upgrade”. At the other end lurk “overnight bus journey”, “flight delay” and “cavity search”. Coming somewhere in the middle is “airport hotel”.  It conjures up an image of somewhere you stay out of necessity, not by choice; a place to endure an inconvenient flight connection rather than frolic for a week drinking mojitos.

Room with a view: special glass offers an interesting outlook while reducing noise

So it is with subdued expectations that I head out to the airport on a Sunday afternoon to check out the new Rydges Sydney Airport hotel. The 318-room, 4.5-star property opened on May 7 and, on paper, is kind of a big deal. It’s Sydney’s only on-site airport hotel, located exactly 184 steps from the international terminal (I counted). For the first time, bleary-eyed travellers can simply stumble towards a bed without having to tackle shuttles, taxis or public transport.

The high-ceilinged lobby is a little sterile but check-in is friendly and efficient. There’s a small business centre, a shop selling snacks, magazines and toiletries, and a screen showing live flight departure information. I’m staying in a deluxe king room, one of a range of room types that starts at the entry-level superior queen and tops out with the executive king suite. The decor is stylish but safe — the usual hotel palette of off-whites, browns and greys. At least there are two pictures of the Opera House and the Harbour Bridge to remind you where you are.

The bed is Rydges’ signature Dream Bed, which I can confirm is ridiculously comfortable. There’s also a pillow menu and I can highly recommend the body pillow, a long, sausage-shaped option which apparently is “great during pregnancy”.  The bathroom is all mirrors, frosted glass and dark tiling but it has a curious open-plan design. The lack of door on the shower gives it the slightly unsettling aura of a public changing room. Sadly, there’s no bath (they’re only in executive king suites), which is a shame given what a welcome sight one can be after a long flight. Gadget-wise, there are all the necessities — iPod dock, 106-centimetre flat-screen TV and a good-size desk with in-built multi-region plug sockets. There are also tea- and coffee-making facilities, a decent iron and a well-stocked mini-bar (which curiously includes a set of dominoes for a Hangover-style riotous night in). 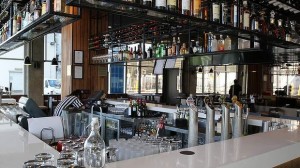 What rescues the room from big-chain mediocrity is the view. From my window, I have a sweeping panorama that includes the city, the airport terminal and the runways. I’m no plane buff but I find myself mesmerised by the relentless blur of activity on the tarmac. In addition to the spectacle of a plane taking off every few minutes, there’s also the constant scurrying of an army of tow-trucks, buggies, forklifts and vans. Even after nightfall, the scene becomes a strangely hypnotic sea of blinking red and yellow lights. 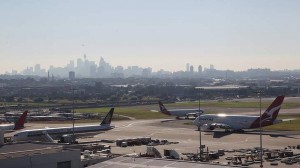 Room with a view

Of course, the flipside is that you’re only a few hundred metres away from a runway and planes don’t exactly tip-toe around after dark. Rydges has used special glass in the windows to combat the noise and it really isn’t that noticeable. It doesn’t stop me getting a good night’s sleep and there’s a curfew on flights from 11pm until 6am.

Pleasingly, Rydges has put some genuine thought into the facilities required at an airport property. The gym is open 24 hours, as is room service, there’s a coin-operated laundry and wi-fi is free for the first 30MB. There are two dining options: Touchdown, a casual, Cheers-style sports bar on the ground floor; and Blackwattle Grill, a more upscale restaurant open for breakfast, lunch and dinner on the mezzanine level.  The interior of Blackwattle Grill is thoughtfully broken up by curtains, screens and pillars, and the design is bolder than in the rooms, with Alice-in-Wonderland-style wingback chairs and leather banquettes. Most important of all, the lighting is flattering enough to soften the shock of a jetlag-ravaged face.

Breakfast turns out to be the unexpected highlight. The buffet has the usual selection of cereals, pastries, fresh fruit and juices, but it’s all beautifully presented in the style of an upmarket deli with some lovely decorative touches such as wheatgrass punnets and a rack of honeycomb. There’s a wide variety of hot options and the tasty bacon, mushroom and cheese omelette I order could feed a family of five.

Given the hotel’s location, its biggest source of clients also represents its biggest challenge. Every day, it receives an unexpected surge of guests courtesy of flight delays and cancellations, which makes rostering staff especially difficult. Over breakfast, I chat to a San Francisco couple who have stayed here for the past two nights after their flight was cancelled. Although their overall verdict of the property is “adequate”, they’re quick to commend the friendliness of the staff and, in particular, those at reception who coped admirably with a sudden deluge of 120 people.

AHS Advisory provided extensive research and development support, and assisted in the selection of Rydges as the operator for the hotel.