A comparison of the Hotels.com Hotel Price Index report in Pound Sterling versus the same report in Aussie Dollars throws up some interesting observations.  Katherine Stott-Wilson, Consultant at AHS Advisory in Sydney, reports:

A continuing recovery worldwide saw a global increase of 3% in room rates when compared to 2011, however average room rates have only improved to the 2005 index level of 106, with a further rise of 11 points required to reach the peak of 2011. An increase of 4% was seen in the Pacific, primarily driven by Australia, with its mining boom and strong dollar. However, whilst growth exists, this has slowed when compared to previous years.

This reduction in speed of growth may be related to the lull in the mining industry, as confirmed by UBS, estimating that global capital spending by mining may drop 33% in the next year from $141 billion to $96 billion. This is something to consider as natural resources won’t last forever. 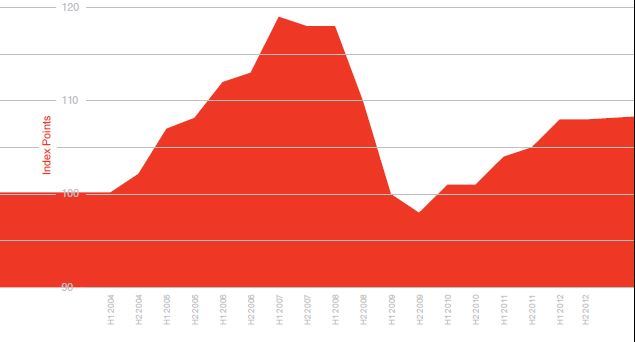 The comparison between analysis in Australian Dollars and Pounds Sterling shows some significant differences.  Looking particularly at hotels in Australia, the percentage of change in prices between 2011 and 2012 varies, as summarised in the table below.

So, whilst Australians were experiencing a relatively small increase in room rates (except in Perth!), visitors from the UK were noticing a much more substantial increase in the average room cost, as a result of the strengthening Australian Dollar.

The flip-side of this phenomenon was exciting for the Australian traveller in 2012: they paid less for their hotel rooms in half of the countries in the Hotels.com study. This explains the increased travel to destinations in Europe and London, with Australians taking full advantage of the strong Australian dollar and lower average hotel prices. The economic situation in Europe was a further contributing factor, seeing a number of destinations drop prices in their local currency as well. 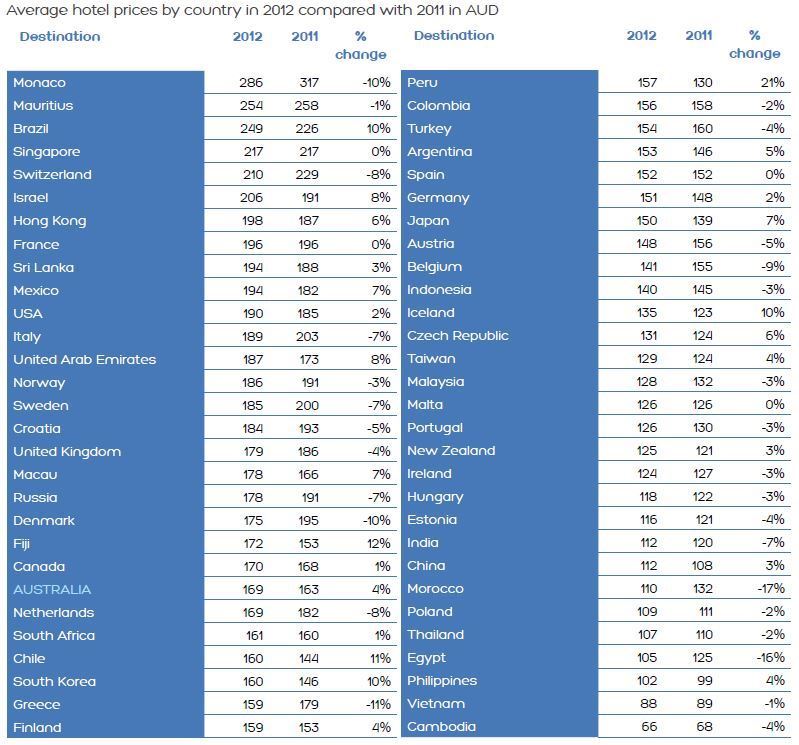 However, visitors from the UK to Australia on average paid 9% more in 2012 then 2011, explaining why UK visitors to Australia may have declined with UK travellers preferring to travel to destinations such as Oman, Greece or Mauritius, where average hotel prices in GBP had dropped considerably, 15%, 11% and 10% respectively. This is reflected in the top overseas destinations for UK travellers, with Australia not making the list, and the rest comprised mainly of European countries. 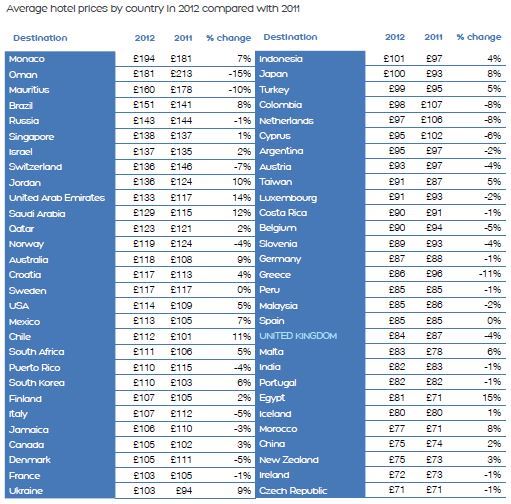 When we looked at the average price paid by visitors to Australia there were some countries that stood out, with Russian and Austrian visitors paying a significantly higher per hotel room amount than last year, increasing by 25% and 22% respectively, whilst visitors from Belgium and Spain paid 9% and 5% less.

When looking at the average price paid for a room in Australia it can also be noted that countries assumed to have a high number of backpacker travellers, such as Germany, generate a much lower room rate than countries with travellers that are more likely to stay in 5-star accommodation, like the Russians. Sitting in the middle of the spectrum are countries that are often associated with tour groups, spreading their business between different levels of accommodation. 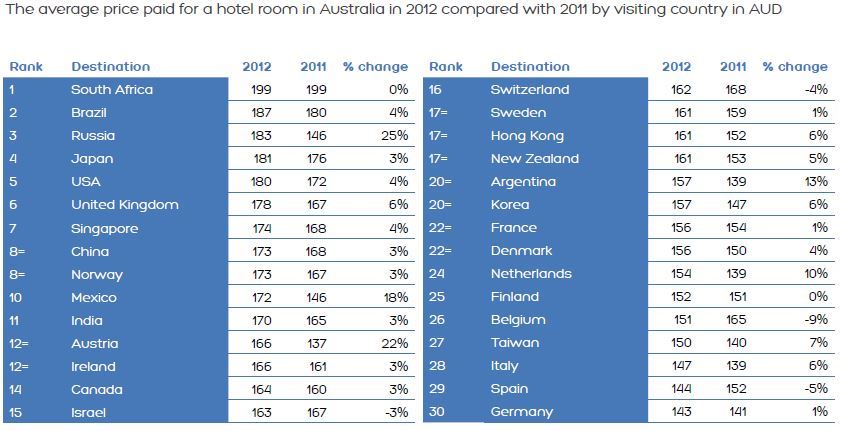 Sydney continued to be the number one Australian destination for overseas travellers with an average room rate of $184, slightly higher than Melbourne, Cairns and Brisbane who hold the following three positions. Despite the fall in prices in many European countries, the US still appears to be the most popular destination for the Australian traveller with the most cities represented in the top 20 destinations. Asian destinations continued to be a favourite with the Australian traveller as well, though there was some movement suggesting a change in popular destinations, likely due to a large number of Asian countries showing increases in their average hotel room prices.

In conclusion, the comparison of the Hotels.com reports in both currencies highlights how markets are impacted differently, depending on their perspectives.  Australian travellers are taking advantage of lower rates (in dollars) overseas, whilst for UK travellers Australia has become very expensive in comparison to other destinations. This goes some way to explaining the continuing widening of the gap between international arrivals and departures in Australia, despite the fact that international arrivals are increasing, boosted by increased interest from Chinese visitors in particular. 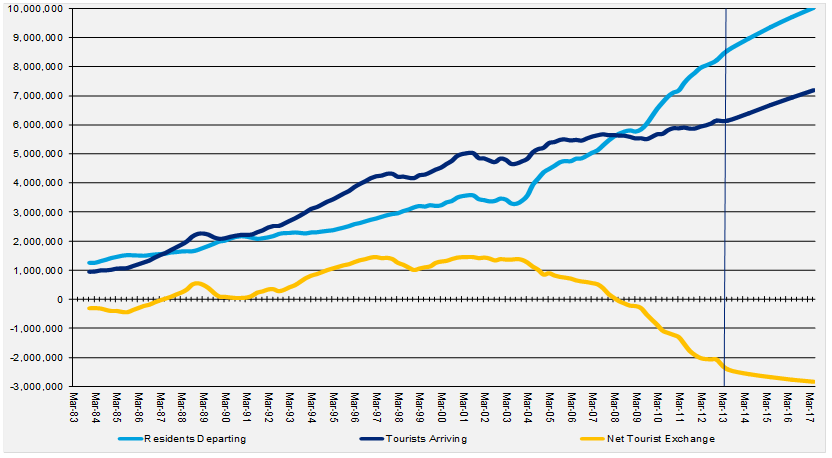 The continued strength of the Aussie dollar, coupled with further increases in average room rates, means that Australia will remain an expensive destination for overseas visitors in comparison to other destinations, whilst for Australians the lure of far-away destinations will remain more affordable.