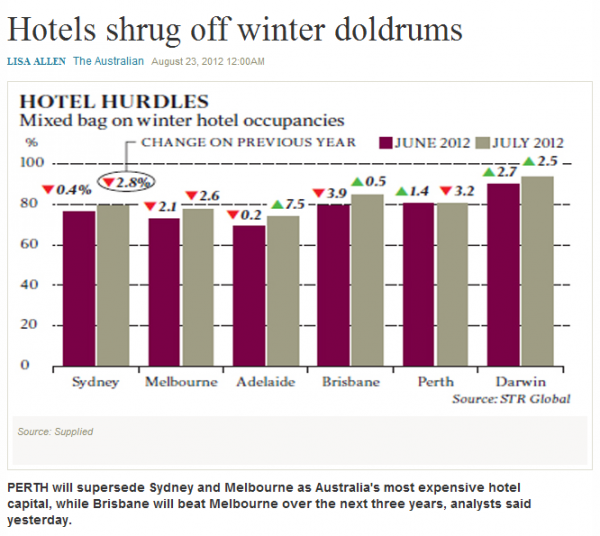 Perth will supersede Sydney and Melbourne as Australia’s most expensive hotel capital, while Brisbane will beat Melbourne over the next three years, analysts said yesterday.

Perth’s hotels will command an average of $260 a night, Sydney’s will attract $220, while Melbourne’s room rates will average $200 by 2015, according to forecasts from hotel advisory AHS.

“Brisbane seems more aggressive and by 2015 could outperform Melbourne with a city-wide room rate of $206,” said AHS principal, Rutger Smits.

Despite the rate rises in the major capital cities, hoteliers admitted to a tough winter.

Hotel occupancies in Sydney and Melbourne dropped in June and last month, compared with the corresponding months last year, according to STR Global’s data, obtained exclusively by The Australian.

TOGA chief executive Rachel Argaman said that last month had been a tough one for the privately owned hotelier and serviced apartment operator which runs the Travelodge, Vibe, Adina and Medina brands.

TOGA says its room occupancies during winter were relatively high but room rates were down.

Sydney was dogged by a lack of major events while Melbourne was a victim of an increased number of hotel rooms.

“It does look as though it was a relatively temporary blip; it was about winter and the lack of events particularly in Sydney, (where) there were no new major events,” Ms Argaman said.

“Our performance (during winter) did not dip as much as other hotels. (For us) June was a good month but July was challenging, but we performed better than the overall market.

“We see a very strong recovery in August in our hotels and September is firming up.”

Ms Argaman said the slightly weaker market performance for Australia through the winter would not put investors and developers off. “When you look at the performance overall there’s a lot of upside and opportunity for growth.”

Jones Lang LaSalle Hotels senior vice-president Peter Harper agreed winter was “soft”, “but we are still 20 per cent ahead of peak occupancies in 2008 in Sydney”. He added: “When you look at Sydney’s revenue per available room — the standard industry measure — it was still 5.3 per cent up on last year.”

Mr Harper said most Australian hotel markets were trading well above previous peaks and he also believed the temporary declines over winter would not deter investors and developers from entering the market.

Mr Smits agreed that investors and developers would continue to show interest. “That’s predominantly in the key cities of Sydney, Melbourne, Brisbane and Perth, and in particular in the investment class market of four and five stars because they are returning good results and will continue to do so,” he said.

“The challenge is getting investors to invest in new projects — that is hard. Construction and land costs are still very high . . . land is priced at a massive premium.”

“The West Australian government needs to help with new supply into the Perth market; it seems like some of the integrated developments in Perth are now seeing mandated new hotel rooms . . . if developers want to have a piece of that development they need to demonstrate they will add in hotel development.”

“It seems like Sydney hoteliers are getting spooked quite a lot by occupancy levels fluctuating.”